L.I: To create a DLO that tells others about tatau 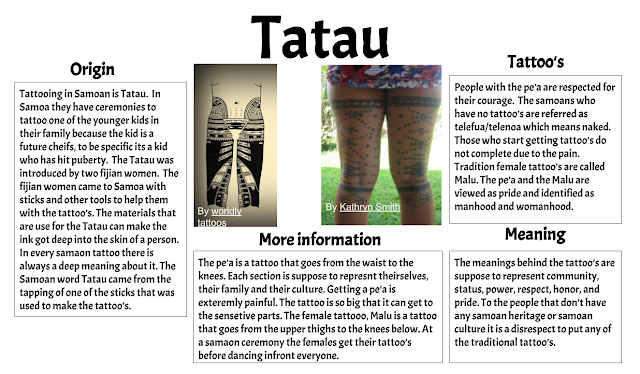 Today I did one of the activites that Mrs Anderson put up for us. I did the Tatau challenge. Basically what I had to do in this challenge was research some information about the Tatau. Some things I learnt about the Tatau was that its name was created by two fijian women. The traditional tattoo represents something that they are resepcted for. Some of them are like status, power, honor and pride. Those are only a few but there's more. The samoan people who have no traditonal tattoo's are called telefua/telenoa which means naked. One of the most used tattoo's are called the pe'a. The pe'a is only used on men. Sometimes on younger kids, specifically on kids who started their puberty. The pe'a goes from the waist to the knees. Each section represnts the person who has the Pe'a, their culture and family. The most popular female tattoo is called the Malu. It goes from the upper thighs and the knees below. I enjoyed this task because I got to learn more about my own culture and the origin of the Tatau.

Posted by Robyn Anderson at 7:28 pm