Today in Writing we did a 'story swap' in pairs to write a collaborative recount that made sense. It was a bit challenging because we could only write one sentence at a time, we weren't able to talk to each other and we had to make sure our ideas flowed even though we weren't thinking the same thing. I learned that if you read your story out loud you can hear if the tense is wrong. 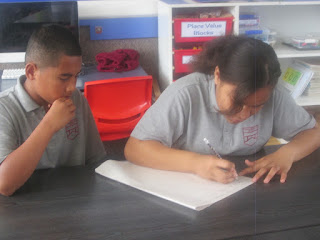 I stared into the cracked windows of the abandoned house trying to discover its secrets. I had to walk in. I felt scared but I still had to do it. The house had stuff I hadn’t ever seen before. I was at least five steps away from the broken door when it slammed behind me. I went into a room and all I could see was an empty space. everything looked shut down. I felt someone watching me as I looked out a window. I turned around but there only the sound of a piano being played to trace. I followed the sound and it took me somewhere where there was a picture of an old scary looking lady. I walked up to it, examining her. Was the music coming from a place behind the picture. I lifted the picture up and took a little look. I saw who was playing the piano. The lady in the picture sat on the seat playing a fast rhythm. When I lifted the picture up more she stopped and focused her action on me. I had this feeling that she was going to come closer but she just sat there and looked at me. I heard breathing. I quickly turned around and saw her there. Confused at why I was here but i just kept staring back. I didn’t know what to do. I blanked out. When I woke up I was outside on the grass.