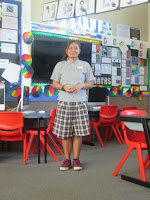 Good Morning students and teachers,
Think about a time where you’ve been in public. Alone. Vulnerable. Prey to the many spectators that are quick to assume the flaws you possess. Strangers, expecting you to be someone you are not. You've done absolutely nothing, yet the only thing that fills their minds are the assumptions of the terrible person you are. These thoughts, purely fueled by your appearance.

So tell me. When will we ever become more than a label?

Yes, we see the outer shell of one's character but have we thought about the content inside? We assume the truth, just because that is what we've learnt. The opinions of one’s race is taught to a child like the rules of a classroom, handed down like the clothes of a sibling, and is as common as a mother's love for her child.

Now, I can not just let this problem be overlooked, like it has been! This is more important than a lot of the things we claim as “Relevant” in the lives we live today. How does this not come up in a conversation you have with a friend, yet the most pointless things do?

Because of stereotypical labels, believe it or not people have died. How many times on the news have you heard of the innocent person who ended up dead on the street? The policeman who thought he had a weapon on him, just because the colour of his skin was a sign that he was threatening. Is it a coincidence that 94% of these victims are coloured?

“I love you too” Sean Bell’s last words before he died. Shot 50 times on his wedding day. Police thought he had a firearm yet the weapon is still not found. They thought. They assumed. They used the colour of his skin to back up their assumptions. Because of this his fiance is unwed, his to be child unborn, his life that was once planned out, now abandoned , like the rest of them.

I am Tired, disgusted, hurt and angry, yet prepared, committed, dedicated and impatient for a change.

We can't stop the thoughts we have about people. We can't stop ourselves from having an opinion. What we can stop, is assuming who people are. Expecting them to be one thing, when they are the other. We should ask not assume. Start a conversation not a rumor. Be normal not sympathetic. For then, and only then, will our true individuality reach its full meaning.

Stop closing your eyes to the things that matter. We must at least make an effort to see beyond race, because if we don’t, who will?

Posted by Robyn Anderson at 7:49 pm