Down with the fish


I could see the bubbles, floating up towards the shiny surface above, but I couldn’t follow them. As the shore swept by, I felt a sudden push. My board, that used to be stuck, was ripped out by the surf, and the rip shoved me further out. It was pitch black, I couldn’t untie the string around my hand. I slammed into something, wondered what it was, then the pain hit. My head began to turn, I felt as if I was going to puke in the water. I screamed in pain and fear. As I tried to hurl up, I was pushed downwards. I heard some cries, and someone shouted out, “Just hold on, son! Help’s on th...” CRASH! The words were swept away by the roaring of the ocean. I could hear a machine coming in from the distance. A steady beat of whoomph, whoomph, whoomph. I could see a red wagon in the air, down came a rope. I heard a calming voice, “It’s okay, kid, I’ve got you.” I thought I was on death's row, my heart felt as if it had stopped. Then everything faded into blackness and murmurs, except for the steady beat of the chopper's blades, seeming to tell me everything will be alright.

This is Lathams and my "5 minutes of.." narrative recount writing sample that we wrote based on a picture of a rescue helicopter. We took turns writing a line each until we had finished it. It was all about what we thought had happened in 5 minutes for the picture. 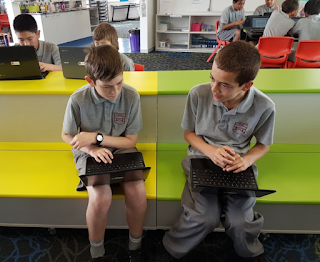 Posted by Robyn Anderson at 6:00 pm