Sanujan - I think that I would be best at test 1 because my eyes send messages
to my brain fast. 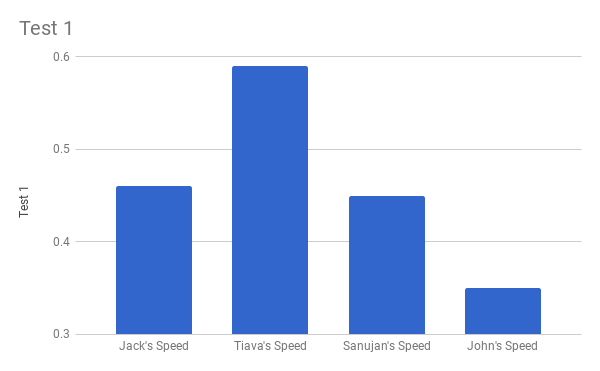 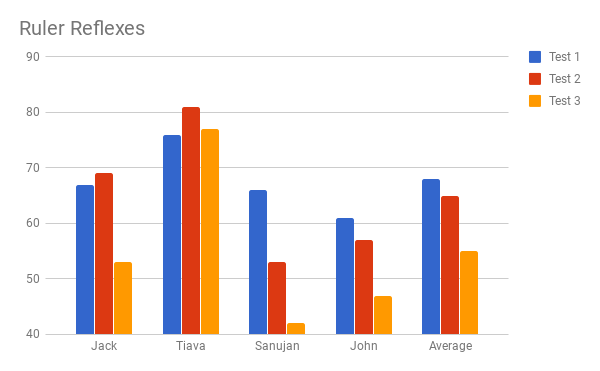 Sanujan : My hypothesis was incorrect because according to the graph I was great at
tactile which is test 1 I was surprised that my connection from my eyes to my brain is not
as fast as through touch.


John -  My hypothesis was wrong because I expected that I had really great ears but I actually don’t. The graph had surprised me when I was excellent on test 3 because my ears sent messages to my brain faster than my eyes open.  What I found surprising was that my partner had faster reflexes than me.


This week for inquiry, we learnt about human reactions. We had a small challenge
that included simply a ruler, a partner, and our reactions. Our task was to attempt
to grab a ruler as fast as possible. We were given 3 different reactions to test.
Visual, where we had to grab the ruler just by watching it. No count down, go or
anything. Nextwas aural, where we had to close our eyes, and where only told "GO"
for when we could attempt to grab the ruler. No countdown, no looking, no
touching, just a simple go. Finally, was touch. We closed our eyes, no words,
just a tap on the shoulder letting us know when to grab. The partner that I was
given was Tiava, and we had a lot of fun working together. What we needed to do
next was graph our data. Although to make it even better, we were to group up
with another pair and graph all of our data in one big graph. So for this, we chose
to work with Jack and Tiava. We had a lot of fun all working together, and in the end, made a pretty great graph.

Posted by Robyn Anderson at 2:14 pm